Exciting races at Spa ( TO )

The third of seven meetings in the Italian FIA Formula 4 Championship was held at the legendary circuit of Spa-Francorchamps (B). With 36 competitors present for the meeting, their expectations were as high as could be ahead of the start.

After a difficult qualifying session on Saturday morning, our drivers knew that they had some work to do in the first race of the weekend on Saturday afternoon. When the lights went out at the start, Valentin got well underway as the big field headed for the first corner. At the end of the opening laps, the German driver was up in 21st place. Valentin then was able to work his way up throughout the race to reach 19th position. Behind him, Nandhavud started in 27th position and put up a brilliant performance to make it up to 20th place. In the final stages of the race, the Thai driver closed the gap on Valentin and made his move on the German driver to cross the line in 19th place. Behind him, Valentin took the chequered flag in 20th position. From 25th spot on the grid, Oleksandr did not get away well and found himself at the very end of the field after the start. However, our Ukrainian driver didn't give up. Oleksandr closed the gap on those ahead and eventually crossed the line in a positive 22nd place. 29th on the grid, Ethan had a slow start as well and had dropped down to 32nd place after the opening lap. The Swiss driver had to find his rhythm in order to then lap after lap improve his position. Ethan eventually took the chequered flag in a good 24th place.

When the lights went out at the start of the race, our drivers were ready to fight and they all managed a good start. As the field headed through the first corners, a car spun at Les Combes and the Safety Car had to be deployed. When the race restarted, Valentin was in 20th place, followed by Oleksandr in 23rd position, Nandhavud in 24th and Ethan in 27th place. Taking advantage of the slipstreams and powering past several drivers, our drivers found themselves really close to each other with Oleksandr now in 17th place, followed by Valentin in 19th, Nandhavud in 20th and Ethan in 21st position. Nose to tail, our drivers were able to fight with each other and exchange positions several times. Unfortunately, another Safety Car had to be deployed with 4 minutes to go and the race ended behind Safety Car. It was Valentin who crossed the finish line in front with a brilliant 15th place (10th rookie). Directly behind him, Oleksandr took a great 16th place, Nandhavud an amazing 17th and Ethan a very good 18th.

In the late afternoon, the driver met for the last time of the weekend for race 3. When the lights went out, all our drivers managed a good start. When the safety car had to be deployed in the opening laps for a contact on track, Valentin was already up to 17th place with Ethan right behind in 18th position. Both Oleksandr and Nandhavud had a good start and were already up to 20th and 21st place respectively. As the race restarted, the fight started again. Once again nose to tail, our drivers started to battle for positions until the end, even though with the slipstream it was very hard to maintain their positions. Valentin crossed the line in 19th place, followed by Oleksandr in 20th and Ethan in 21st. Unfortunately Nandhavud lost some positions after the start and in the end crossed the finish line in 26th place. 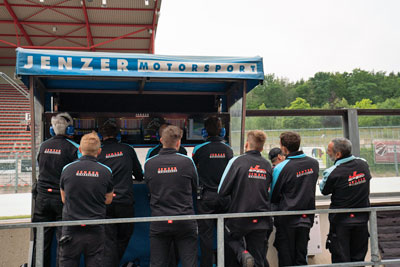 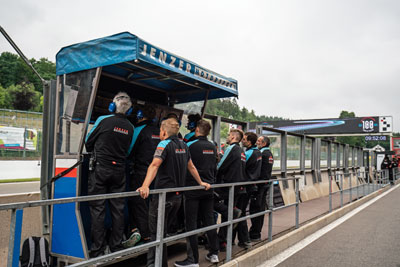 The fourth race meeting of the Italian Formula championship is scheduled for the weekend of 3rd July in Vallelunga (I).