Carrara with podium in Monza

The third of seven meetings in the Italian FIA Formula 4 Championship took place on the ultra-fast GP circuit at Monza (I). A great field of 29 drivers took part in the meeting. You can follow the races live on sporttube tv.

The rules allow for two qualifying sessions of 15 minutes, with a 10-minute break in between. The Qualifying 1 times determine the grid for Race 1 and the times from Qualifying 2 determine the grid for Race 2. The starting order for Race 3 is based on the 2nd best lap time of each driver in either qualifying session.
The temperature was already rising when qualifying started but they’d only done a few laps when the session was red flagged because of an accident. Everyone came back to the pits and when it was all clear they were quickly back on track for one last run. Gregoire managed to grab pole position for race 1! In the second session he missed out on pole by a fraction of a second on his last lap. He had done very well anyway and the rest of our drivers also ended up in very good positions.

Gregoire wasn’t able to take advantage of his pole position because he didn’t make the best of starts. Fortunately, the big field made it through the first chicane without difficulties, but a few laps later a car stopped in an unsafe position and the Safety Car was deployed. Gregoire was 4th. Giorgio 8th. Federico 9th. Javier 11th. Nazim 14th and Oliver 15th. With a top speed of almost 250kph the drivers were put through their paces. Gregoire ran wide and dropped back to 9th, while Giorgio managed to improve steadily, working his way up to an excellent 3rd place and thus the podium after an impressive drive. Federico did not have a good start and dropped back slightly, but later he regained his confidence and set the fastest lap time of the race, while improving to 5th place. Javier fought hard, which resulted in damage to his front wing, which meant the end of his race. Nazim managed to advance to the top ten and after a strong drive he crossed the finish in 8th place, earning points for the first time. Oliver had also worked his way up and finished an eventful race in 11th place. 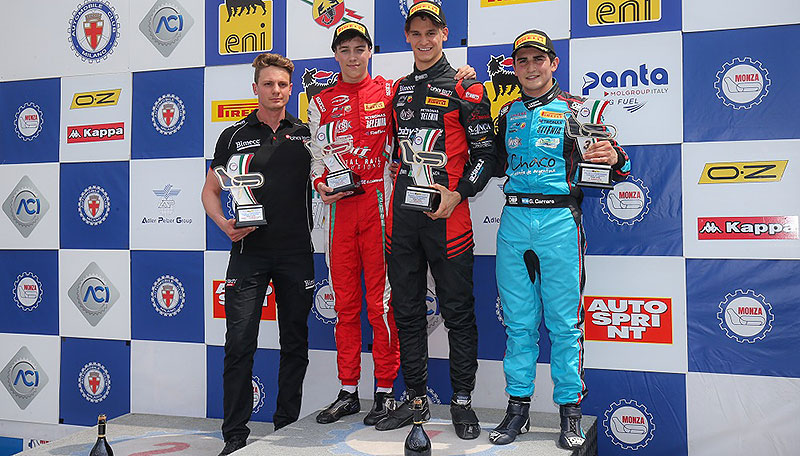 At 9 o'clock in the morning it was already over 20°C, and there was fierce fighting right from the start. Perhaps inevitable there was an accident and the Safety Car took over. Javier was 6th, Gregoire 7th, Giorgio 9th, Federico 10th, while Oliver had been hit and came to the pits with damaged rear wheel and side, his race already over. At the restart, Javier was pushed off and lost places. Positions changed almost every lap and it wasn’t long before there was another accident with the Safety Car having to be deployed again. Everyone was preparing for the restart, but Krutten was already at full throttle and shot between the other cars, knocking Javier and Giorgio off. They both made it back to the pits with their damaged cars. As the race continued Federico was 8th, Gregoire 10th and Nazim 14th. There were several incidents in the final laps of the race too, with Federico managing to move up to 6th, while Gregoire quarrelled with another competitor in the Parabolica, flew over the kerbs and hit the tyre wall. Only two out of our six drivers had actually made it to the finish line. After the race a penalty was handed to Doohan, which moved Federico and Nazim up one place each. 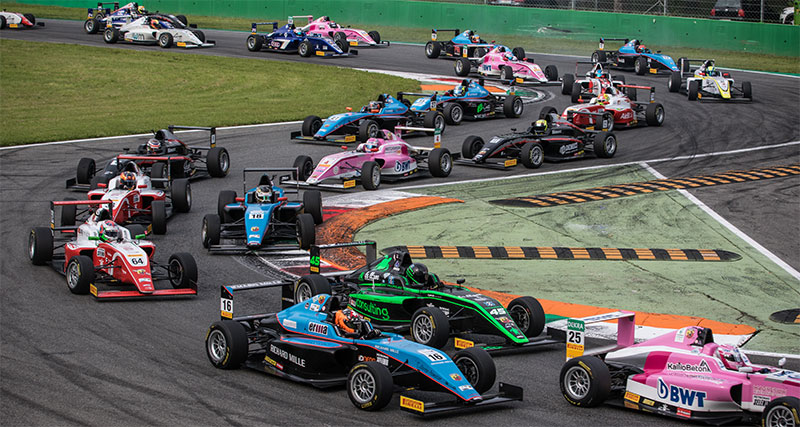 In the afternoon the temperature was really high. Gregoire started well and remained in the top three. Javier made contact with Rodriguez and dropped back a few places. It turned out that his car had sustained damage at the rear, but nevertheless he did his best and continued on. Federico kept his position after the start and was making good progress, while Nazim also did well and gained some places. Giorgio didn’t get away at the start, but then he set off in hot pursuit, sometimes making up two places in one go. Oliver was unlucky, as another driver left their braking too late into the chicane and bundled Oliver off the track. The Safety Car had to take over the field. At the restart Gregoire was surprised and had to defend himself, but he touched another car and ended up spinning, which was a shame. Javier was able to avoid the incident but lost momentum and a place. Federico was now 5th, Javier 8th, Nazim 9th and Giorgio 11th. Giorgio managed to secure 10th place with a great manoeuvre shortly before the end. Federico went side by side with Fittipaldi but had to give way at the last corner. However 6th place again meant good points, and it moved Federico up to 5th place in the championship ranking.

The next race of the Italian F4 Championship takes place on the weekend of 17th June 2018 at Misano (I). 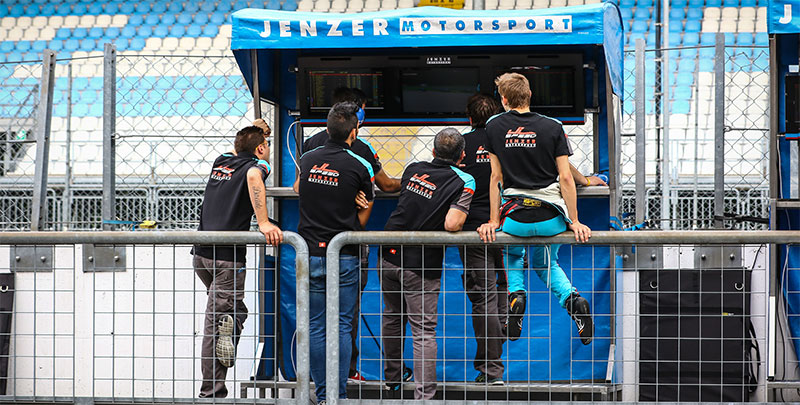