Carrara with Podium at Paul Ricard

The second of seven meetings in the Italian FIA Formula 4 Championship took us to the famed French GP circuit at Paul Ricard. A huge field of 33 drivers entered the competition. You can follow the races live on sporttube tv.

When the huge field set off for the qualifying session on Saturday morning the air was still fresh and the lap times were incredibly close.

The start of the race saw the massive field get away without a major incident, although there were some exciting moments here and there. Federico moved up to 6th place, Javier was 9th, and Giorgio was 11th. Oliver had improved to 14th, and Nazim was already 17th. There were attacks and overtaking manoeuvres, and our drivers were at the heart of all the battles. Gregoire and Rodriguez collided, and Gregoire was left with a damaged left side and tyre. He made it back into the pits, but unfortunately had to retire. Federico was now already in an excellent 5th place, and managed to hold onto this place all the way to the finish line. Javier and Giorgio fought long rounds with Rodriguez, Krutten and Petekof and in the end, Javier managed to save 7th place. Giorgio, who had already advanced to 8th place, finally saw the chequered flag in 9th place. Oliver and Nazim were also doing very well and had made it into the front half of the field. Oliver and Nazim finished a tough race in 14th and 15th places respectively.

It started to rain in the morning and the track was very wet. This was challenging for everyone, and many of them got their first experience of racing in the rain with the start taking place behind the safety car. Giorgio got away well and held 4th place, settling into a good rhythm and, in these difficult conditions, he persisted in his efforts to overtake Lorandi until he succeeded! Giorgio drove a very strong race and in the end earned an excellent 3rd place on the podium. Gregoire fought lap after lap in a group of three and succeeded in hanging onto 8th place all the way to the end. Javier was consistently 11th and stayed there in an incident free run to the finish. Oliver, in his first wet race ever was doing very well in 14th place, while Federico, who had the top ten in his sights, was hit hard and spun off the track. He was able to rejoin despite damage and managed to work his way up to 17th by the end. Nazim, who performed well in the slippery conditions, finished 18th immediately behind him. Then, just before the end of the race, a car stopped at a dangerous spot and the race was red-flagged to an early stop. 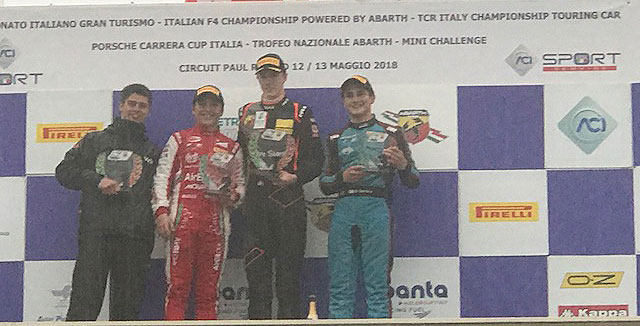 The rain stopped after noon, and the third race of Formula 4 started according to plan. Everyone started on slicks, because with the wind the track dried out rapidly. Nevertheless, caution was needed, because in places it was still wet. Giorgio ran wide and lost several places, ending up with dirty tyres. He reached the finish in 9th place, just in front of Gregoire, who made a good recovery and thus got another point. Federico crossed the finish line in 14th, just ahead of Nazim, who had improved to 15th place; Oliver came home in 17th. Javier was hit by someone else at the start and damaged his front wing. In the pits the part was changed and he rejoined the pack. He then managed some very good lap times and drove through the field to reclaim 26th place.

The next race of the Italian F4 Championship takes place on the weekend of 3rd June 2018 at Monza (I).