Kluss in the points at Monza

The sixth of seven meetings in the Italian FIA Formula 4 Championship took place on the ultra-fast GP circuit at Monza (I). A great field of 44 drivers took part in this event of the season. 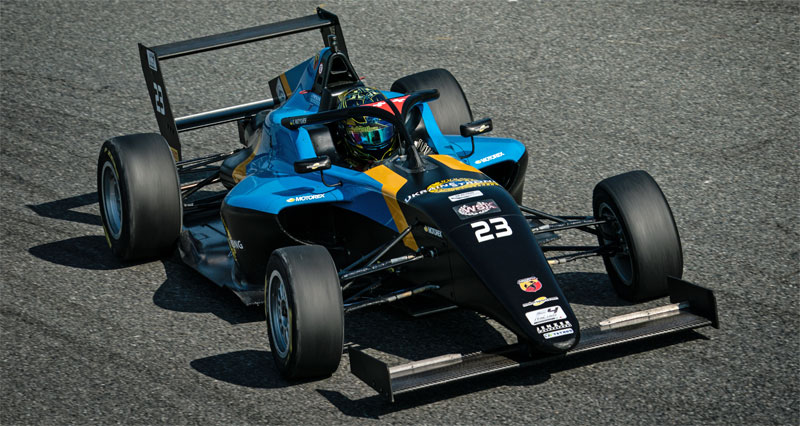 Coming from two heavily disrupted qualifying sessions, the tension was high when the 44 drivers met on the grid for what turned out to be an unsurprisingly chaotic first race of the weekend. A total of four safety cars had to be deployed throughout the 30 minutes, turning the race into a matter of survival. Starting from 22nd place on the grid, Valentin superbly managed the mayhem and kept himself out of trouble. Our German driver was able to make steady progress through the field and even enjoyed some nice battles. When the checkered flag finally waved, Valentin crossed the line in a brilliant 8th place!! Behind him, neither Nandhavud nor Ethan had it easy. Through the slipstreams, the multiple restarts and the hard battles, Nandhavud and Ethan did a good job to cross the line in 16th and 17th place respectively. Unfortunately, Oleksandr got caught up in the accidents halfway through the race. Our Ukranian driver was running in a good 17th place, but dropped down the order and eventually had to retire from the race.

On Sunday morning, the weather at the temple of speed was very unfriendly. The circuit got hit by torrential rain all morning and when the drivers made their way to the grid, rain came down even heavier. Despite the best attempts to try and get the race started, track conditions were too bad and race 2 was postponed to the afternoon, and due to the limited time left on this day, race 3 was cancelled.
After the heavy rain in the morning, conditions improved during the day. The Race Director decided to declare race 3 cancelled and race 2 postponed until 17.00. So when the drivers finally met for the final race of the weekend, it was with the starting grid from qualifying 2. The track was still wet and slippery and the race got started behind safety car. In this tricky conditions and with this huge field with everyone battling their way forward, it didn’t take long for the safety car to be deployed. Everything was looking good for our drivers, as they were keeping their cars out of trouble and they took advantage of the restart to make up positions. This is when Ethan got involved in a contact and had to retire his car. Such a shame! Disaster struck for Nandhavud as well. Right before the safety car was deployed once more, our Thai driver was on a good forward run in 20th place. Unfortunately, another car made contact with him and Nandhavud found himself stuck in the gravel trap. His race was also over. Oleksandr and Valentin were still in the race and they were fighting hard to get the best out of the final stages. With 2 minutes left on the clock, the red flag came out and put an early end to the race. Oleksandr took 20th position, followed by Valentin in 21st place. Nandhavud was in 36th place on the results sheet.

The seventh and last race meeting of the Italian Formula championship is scheduled for the weekend of 23rd October 2022 at Mugello (I).