The 2022 FIA F3 met up for their fourth race event on the fluid and demanding Hungaroring Circuit near Budapest, racing as one of the support races for the Formula 1 Aramco Magyar Nagydij 2022. Overtaking is normally not easy on this circuit, and the drivers faced major challenges in terms of tyre management and track limit observance.

Formula 3 action got underway at the Hungaroring starting with the practice session on Friday morning. Conditions were ideal when the 30 drivers met in the pitlane ready to get the weekend started. Our drivers completed their first run with William in 8th position, Ido in 17th and Federico in 23rd place. With 10 minutes to go, the new sets were fitted but some traffic made it hard for our drivers to take advantage of the new tyres. William finished the session in 21st place, Ido in 23rd and Federico in 30th.
Not much later, under the hot afternoon sun and with air temperature almost hitting 33 degrees, the qualifying session got underway. Unfortunately, Ido and William got their lap times deleted after the first push laps and found themselves in 21st and 26th place respectively. Federico was in good rhythm and was up to 18th place. An omission from his side then prevented the Italian driver from making the second run as planned. Federico had to wait in the pitlane while his engine cooled down. In the meanwhile, William and Ido completed their second run. The Finnish-Ethiopian driver was now in 17th place, while unfortunately Ido's lap got once again deleted and the Israeli driver was now in last place. For the last run, all our drivers headed out ready to get the most out of the final laps. Unfortunately, while they were pushing, a red flag came out as a car stopped on track with 3 minutes left on the clock. The session then resumed. William qualified 20th, followed by Ido in 23rd place. Unfortunately, Federico's laptime got deleted and he finished the session in 30th place. Yes, track-limit penalties influenced the qualifying session greatly!

Grey clouds were looming over the circuit on Saturday morning ahead of the Sprint Race. Exactly when the drivers were making their way to the pit lane, it started pouring down and wet tyres had to be fitted. The rain lessened when the field was positioned on the grid. The drivers completed two formation laps behind the safety car before proceeding to a rolling start. William managed to hold on to his starting position when the race got underway. He kept 20th place. Behind him, Ido was confidently on the move and improved up to 22nd place. A safety car had to be deployed after the first lap and Federico moved up to 29th position. On lap 5, disaster happened as Benavides attempted braking on the slippery white line and slid into Ido in Turn 1, putting both their young races to an end. Ido seemed to be able to continue, but then had to come back to the pits where he unfortunately had to retire because of the sustained damage. Despite the challenging conditions and the multiple disruptions, William and Federico did a brilliant job steadily making improvements during the race. William crossed the finish line in 16th place, with 4 positions recovered. Federico took 25th, recovering a total of 5 places.

It had rained heavily on Sunday morning when the teams arrived at the circuit, but conditions improved as the feature race approached. With the wet tyres fitted, the drivers made their way to the grid for a standing start. William got off brilliantly when the lights went out and moved up to 16th place already by the end of the opening lap. Ido took the start in 23rd place and held on to his position. 29th on the grid, Federico made a smooth getaway to take 26th place after the first lap. The first half of the race saw our drivers managing their tyres and trying keeping their positions. With a shy sun now shining over the circuit, a dry line was getting visible on the track and a decision had to be made: pit for slick tyres or finish the race on wet tyres? With 8 laps to go, some drivers took the gamble and pitted for slick tyres. Soon the advantages were visible and they were mixing up the order. While William and Federico decided to stay out, Ido decided to come to the pit lane for a quick stop to change to slick tyres, although only a few laps remained. The fight for positions was on for the final laps. William had only dropped two places and crossed the finish line in 16th place, with his wet tyres very much destroyed. Ido had managed to climb up the order quickly, to finish right behind William in 17th place. It was 25th place for Federico, who had stayed on wet tyres.

We are looking forward to the next race which will take place on the weekend of 28th August 2022 in Spa-Francorchamps in Belgium. 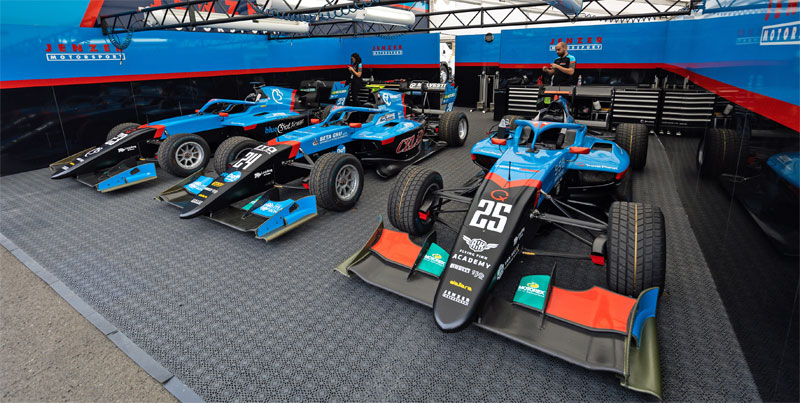 Championship standings after 12 out of 18 races: