Kluss with good start in Misano ( TO )

The second of seven meetings in the Italian FIA Formula 4 Championship took place at the Misano World Circuit near Rimini (I). With 30 competitors present for the meeting, their expectations were as high as could be ahead of the start.

In the sunny afternoon, hours after the two qualifying sessions, the 35 drivers met on the grid for the first race of the weekend. From 24th place on the grid and in his first ever race in this category, Valentin did a brilliant job. On a frenetic first lap, Valentin drove very well and stayed out of trouble. The German driver was already up to 20th place when a Safety Car had to be deployed at the end of the opening laps due to multiple incidents on track. Ethan started further back on the grid, in 30th position, and managed a brilliant getaway. The Swiss driver was already in 22nd place when the Safety Car had to be deployed and that was when disaster struck: under safety car conditions, Giovanni Maschio hit our Swiss driver from the back. Ethan found himself with a broken rear wing and a broken suspension, meaning his race was unfortunately already over.
When the race got back underway, Valentin remained glued to the rear of the cars in front of him and then put in a battling performance. The German driver, lap after lap, was able to improve his position and to overtake the drivers in front to eventually cross the line in 17th place - with 7 positions gained in his first race!

On Sunday morning the second race of the weekend got underway in already hot temperatures. Valentin started from the 21st place on the grid and immediately gained a position when the lights went out. The German driver then drove in a group and fought hard to try and gain some places. The challenge was tough, but Valentin managed to secure another position and took the chequered flag in a positive 20th place. Ethan took the start from 24th place and fought to hold onto his position in the opening laps. The Swiss was trying his best to gain more places and was up to 23rd spot when a too optimistic manoeuvre resulted in a small collision with Hwarang. Ethan had to come back in the pits with a damaged car and eventually retired from the race.

In the late afternoon, the final race of the weekend got underway. From the 27th place on the grid, Ethan delivered a smooth start and was already up to 21st position after the first laps. The Swiss driver went with the group and gained another place, being now 20th. Unfortunately, Valentin didn’t manage a good gateway from the 24th spot and lost a position at the start. Things got worse when our German driver had a contact and was forced to enter the pits for a quick change of the front wing. At this point, our drivers were managing their pace in 20th and 29th place respectively. This is when a safety car had to be deployed and the gaps between the drivers were naturalised. Valentin was able to rejoin the field, while Ethan found himself in a very good place to fight for positions. The race went back underway for the final two laps, but disaster happened. Weug, was driving without the front wing and went wide, rejoining the track across two other drivers. As Ethan, who shone with brilliant moves and was up to 16th place, was approaching fast, he couldn’t avoid a collision. The crash involved four drivers and brought out the red flag, which ended the race earlier. Results were taken from the previous lap and therefore Ethan was still classified 16th (10th rookie). Staying out of trouble and taking advantage of the situation, Valentin recovered several places and took 24th place at the end.

The second race meeting of the Italian Formula championship is scheduled for the weekend of 19th June in Spa-Francorchamps (B). 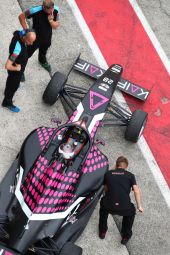