Rookie podium for Braschi and top ten for Ramos Reynonso, Braschi and Wisnicki at Mugello ( to )

The sixth of seven racing events for the Italian FIA Formula 4 Championship took place on the demanding Mugello circuit near Florence. Again the grid was huge with 29 participants ready to race. 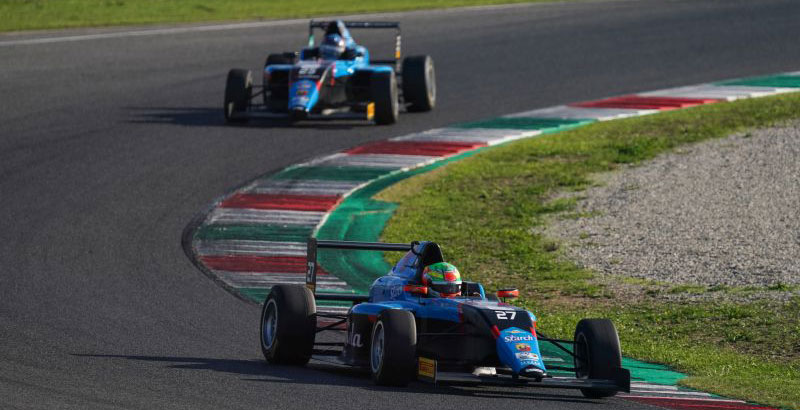 On Saturday afternoon, the 29 drivers met on the grid for the first race of the weekend. Despite some grey clouds were threatening rain in the early stages of the race, the sun kept on shining. Santiago started from the 9th position with a very good getaway. The Mexican driver immediately gained a position and remained glued to the rear of the train. Behind him, Francesco and Piotr started in 11th and 12th place and as the lights went out, Piotr managed to get past his Italian teammate and the two drivers switched positions. Already on lap 2, a Safety Car had to be deployed as our Swiss driver Samir and Al Qubaisi got involved in a contact and they were both in the gravel and out of the race. Starting from the back of the grid and taking advantage of the troubles in front, Jorge moved up to 25th place. When the Safety Car pulled over in the pits, our drivers restarted well. Nose to tail with the drivers in front, Santiago tried hard to find a way past but, in such a difficult circuit as Mugello, finding a way through was impossible and he eventually crossed the line in a brilliant 8th place! Piotr and Francesco battled until the end of the race and it was the Italian driver that managed to get past and crossed the line in 11th position, in front of Piotr in 12th place. A tricky race for Jorge, saw the Mexican driver taking 25th place at the finish line.

On a very windy and cold but sunny Sunday morning, the second race of the weekend got underway. Santiago managed to get away well at the start and he was up to 8th place after the first lap. Unfortunately, a contact with Antonelli put an end to his race after the first few laps. The safety car had to be deployed to recover the car. Francesco stalled at the start and dropped down the order. He was now in 21st place and was battling to move up through the field. This is when disaster happened and a contact with another driver meant Francesco was in the gravel and his race already over. A good start from Piotr saw our driver advancing to 11th place in the opening stages. Struggling to find the pace and with this cold temperatures, after the restart Piotr lost a few spots and eventually crossed the line in 14th place. Some trouble also for Samir, the Swiss driver suffered a puncture over the course of the race and had to come back in the pits for a tyre change, losing a lot of time. He was classified 25th at the end. Starting from the back of the grid, it was a challenging race for Jorge who battled and stayed out of trouble to eventually cross the line in 23rd place.

In the afternoon the sun was shining but the temperatures were still cold, a thrilling final race of the weekend took place in Mugello. When the lights went out, our drivers managed some great getaways. By the end of the first lap, Santiago was already up to 8th place, with Piotr in 10th and Francesco in 12th – all in the pack for points. Making stealthy progress through the field, lap by lap Santiago climbed up to 5th place and was right behind Bedrin, putting pressure on the Russian driver. Behind him, also Francesco was making moves and managed rapidly to catch up with his Mexican teammate. When our Italian driver closed the gap with Santiago, the battle for the podium began and it was thrilling. The chequered flag saw Santiago crossing the line in 5th place, with Francesco in 6th (conquering a brilliant 2nd place rookie). Behind them, Piotr was equally in the fight for points and he managed to finish the race in a fantastic 7th place. Unfortunately, it was a trickier race for Samir. After a good start, the Swiss driver had to return to the pits to change a broken front wing. After that he was able to finish the race in 27th position. While started from the last place on the grid, Jorge was able to make some moves and climb up some places, to eventually cross the finish line in 23rd position.

The seventh race meeting of the Italian Formula championship is scheduled for the weekend of 31st October 2021 in Monza (I).