Podium for Ugran in Monza ( to the )

The fifth of seven meetings in the Italian FIA Formula 4 Championship took place on the ultra-fast GP circuit at Monza (I). A great field of 27 drivers took part in the meeting.

Both session were disrupted by a red flag. The first Qualifying session saw Filip taking the 9th position, Santiago qualified in 16th place. Jasin took the 18th position, with Francesco right behind in 19th and Piotr in 20th. In the second one, Filip managed to improve up to 4th place, before a full course yellow prevented him from improving further more. Both Santiago and Piotr completed the top 10 in 9th and 10th place respectively. Francesco took 23rd and Jasin 24th.

When the lights went out at the start, Filip got well underway and immediately slotted into 6th place. After closing the gap to the drivers in front, the fight for places begun. Two safety cars had to be deployed, but Filip restarted well and fought hard to reach the podium. At the photo-finish, he crossed the line in 4th place. Following Mini's 5 seconds penalty, Filip moved up to a fantastic third place. Piotr started from 20th place on the grid, but lost some ground at the start. When he finally found his rhythm, he took advantage of the restarts to muscle his way through the field and crossed the line in a brilliant 9th position, taking his first points of the season. Santiago had a solid start and kept progressing during the race, starting from 16th place and finishing in the top ten in 10th place. After Mini’s penalty they both moved up another position each. The race was tough and really close and our drivers did a brilliant job. 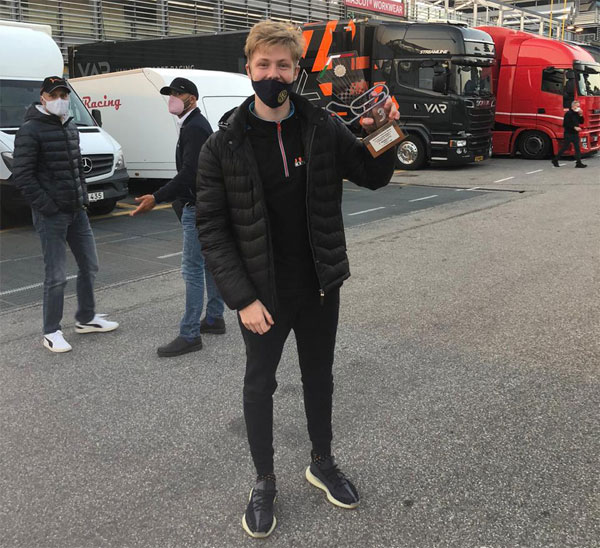 As usual, races in Monza are tough and Race 2 was no different. The morning was chilly when the field moved to the grid. Filip started from 4th position, but as Rosso didn't make it to the start, he was already promoted to 3rd place when the race started. Filip had moved up to 2nd place but later, with the slipstream game, lost positions and was handed down to 5th. Filip was ready to fight back and regain the positions. That is when, with 17 minutes still to go, an incident brought out the Safety Car. The front runner slowed down harshly, which put the following cars in trouble. Delli Guanti made a move to avoid another car but by doing this made contact with Filip, which put both out of the race. The drivers were ok, but their race was over and the cars badly damaged. On his second outing in the 2020 Italian F4 season Santiago shone with a great drive. He started the race from 9th place, restarted well after the safety car phase and took a fantastic 5th position at the end. Behind him, Piotr claimed his best result after starting from 10th place and crossing the line in brilliant 6th, continuing his good progression throughout the weekend. Francesco started from 11th row, but had to go back to the pits after a contact with Patrese, which left him with a flat tyre. Francesco rejoined the race and eventually crossed the line in 16th place.

Race 3 took place on Sunday afternoon, with the temperatures being still chilly. A safety car phase interrupted the race on lap 9, as a car stopped in the gravel and had to be recovered, but our drivers managed to restart well. Santiago had started the race from 9th and got away well. He gained positions during the opening laps, moving up into 6th place. There was a fierce battle for positions going on and he changed from 6th to 5th and back again several times. In the end Santiago managed to bring home another fantastic 5th place. Following the collision in Race 2, the team did an amazing job to get Filip's car ready for Race 3. Unfortunately, he received a 10 places grid penalty because his engine had to be changed, meaning he had to put up a recovery drive, which he did brilliantly. Filip had a hard fought race and eventually crossed the line in a positive 8th place. Piotr started right behind Filip, in 15th place and was doing well. Unfortunately, a contact during the final stages of the race damaged his front wing badly and he had to retire. Francesco was 21st on the grid. He didn’t get away well at the start and lost two positions, but then drove well and improved his position up to a very good 14th place.

The sixth race meeting of the Italian Formula championship is scheduled for the weekend of 22nd November in Imola (I).