Super Qualifying but no results in Monza

The FIA F3 Teams met up on the very fast Monza (I) circuit, as ever racing as one of the support races for the Formula 1 Gran Premio d’Italia 2020. This was their eight outing in Europe supporting the 2020 Grand Prix Programme. The weather was still agreeably warm throughout the weekend. Competition was tough and everybody gave it their best shot to try and shine.

In free practice on Friday morning, Matteo reached the promising 12th place, Federico was 25th and Calan was 29th.
The qualification went very well, with the first set of tires Matteo was in 3rd place, Calan in 6th and Federico in 18th place. After everyone drove out again after changing tires, the session had to be broken off because Lawson's car had a fan when it was driving out, which was now in the middle of the track. The time had now shrunk to less than 9 minutes, and when the session started again, several cars drove very slowly, obstructing the competitors. Only a few managed to improve the lap times. Penalties were distributed after the session. Matteo was now listed in 2nd place, Calan in 4th place and Federico in 23rd place. 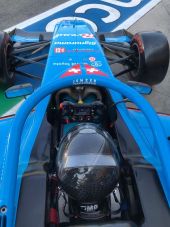 After the start, Matteo managed to slot into second behind Lawson. Pourchaire and Hughes had more momentum and attacked immediately. Matteo fell back to 4th place. After that he managed to keep this place for long laps and to catch up with the top three again. Lawson had dropped to 3rd place. Matteo decided to take a chance on overtaking Lawson into the chicane. But the two collided. Matteo stopped with a flat tire and his race was over. Lawson was able to continue. Calan was 5th after the start and held this position well. He had caught up with Matteo, and behind them there was a distance to the next driver over several laps. Later Peroni was able to catch up and clashed right into Calan as he pulled into the chicane. Calan spun and and was only able to continue when almost the entire field had passed. He reached the finish line in 25th place. Federico had to avoid an accident after a few laps and went off track at high speed over the grass. He managed to file into the field again in 20th position. His tires were dirty and on the next few laps a couple of competitors managed to get past him. Towards the end of the race, Federico made up positions again and finished in 21st place.

The field of 30 vehicles set off again on Sunday morning in the most beautiful sunshine. Immediately after the start, Calan had contact in the chicane and came back into the pit lane with a damaged car. Equipped with a new front wing and new front tire, he drove back on the track. Since there were several accidents in the further course of the race and the order of the drivers kept changing, he finished 19th in the end. Matteo, who had to start at the back, improved to 21st place by the end. Federico started with the best starting position and was steadily making up positions. He had already moved up to 13th place when his tires began to wear off badly in the last laps. In the end he crossed the finish line in a good 15th place.
After the race several penalties were handed to drivers, which resulted in each of our drivers moving up one place in the results.

We look forward to the next race which will be held in just one week’s time at Mugello (I). This will already be the last race event for FIA F3 in this very special 2020 season.

Championship standings after 16 out of 18 races: 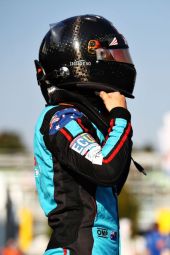 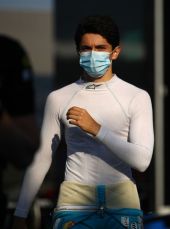