The 2020 FIA F3 met up for their third race event on the fluid and demanding Hungaroring Circuit near Budapest, racing as one of the support races for the Formula 1 Rolex Magyar Nagydij 2020. Overtaking is normally not easy on this circuit, and the drivers faced major challenges in terms of tyre management and track limit observance. 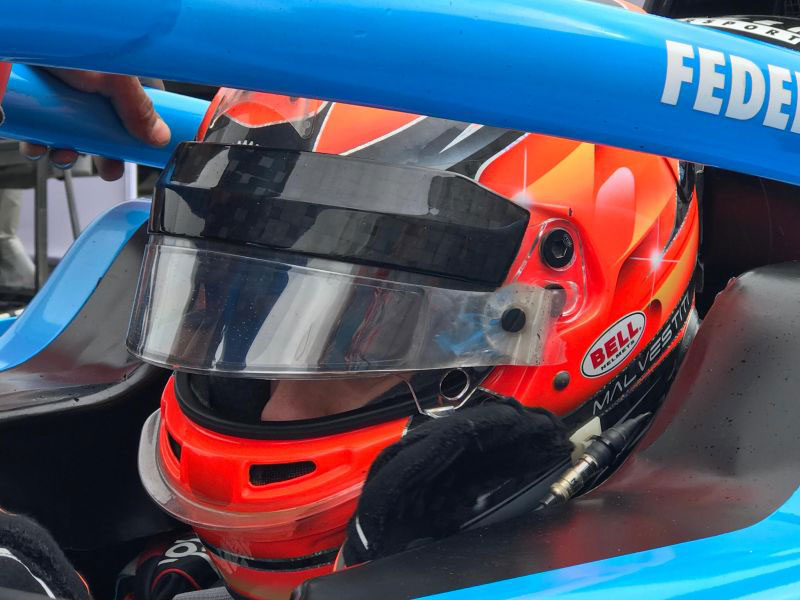 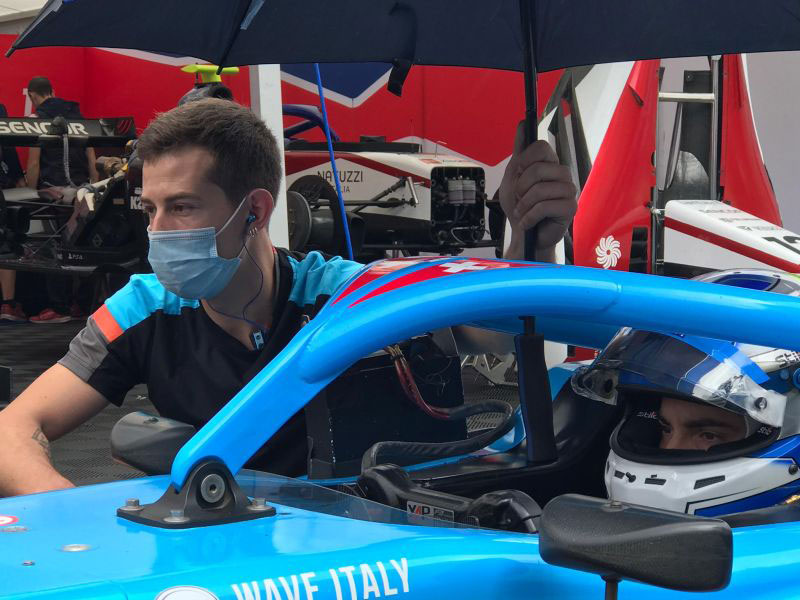 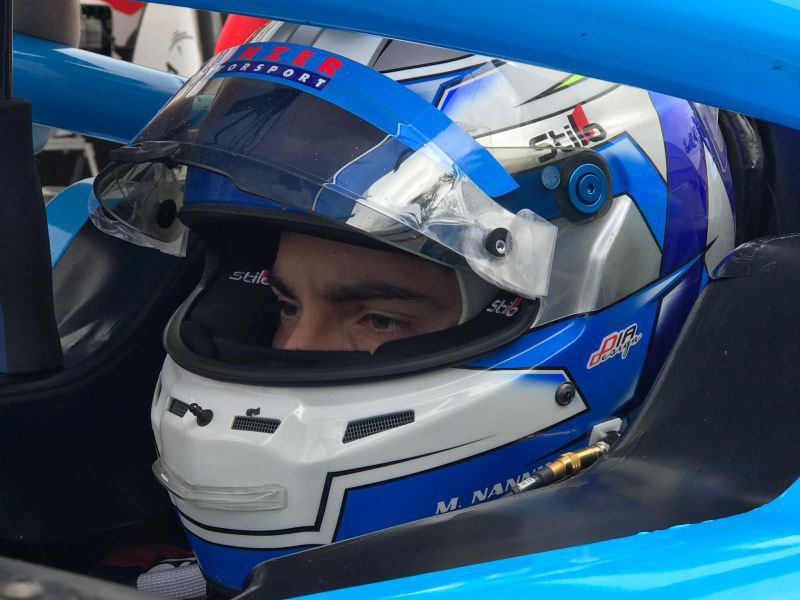 It rained a bit at night, but the track was almost dry for free practice in the morning. Our drivers performed very well, with Matteo as 13th, Calan as 16th and Federico as 20th. After the session, a few drops fell again and dark clouds covered the sky.
Later it started to rain continuously. Rain fell even harder when the 30 powerful FIA F3 racing machines were ready in the pit lane for the start of the qualifying session. The session started and the cars produced large spray. Not everyone had completed a first lap when Zendeli and Lawson slipped on aquaplaning and spun off into the gravel bed. The session was immediately stopped with red and after a few minutes it was anounced that the session was suspended. Everyone returned to the paddock drenched.
The qualifying session was rescheduled in the evening at 19.05. It was still wet, but it rained less. The track was very slippery, and yet the times were getting faster towards the end. Calan found a super line and reached an excellent 5th place. Federico should have gotten close to the top ten, but in his best lap the last sector wasn't going as well as before. Nevertheless, he reached a good 17th place. Matteo often went wide and didn't find a good line. He was 29th in the end. 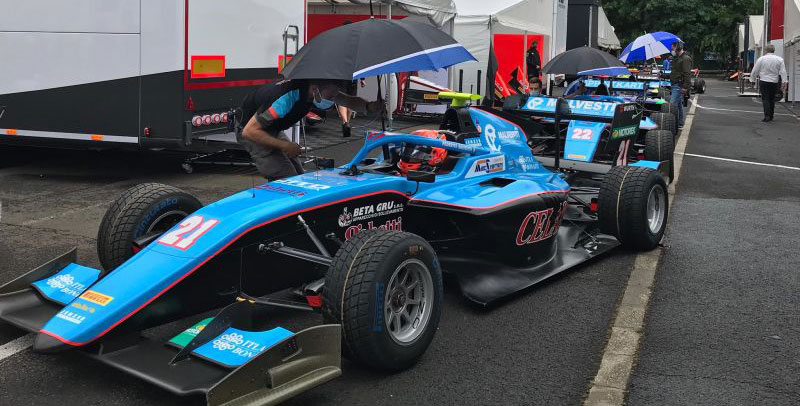 In the morning, a few raindrops fell, just enough to keep the track slippery. Because no further rain was expected, everyone chose slick tires. There was a collision in the first corner when some went skidding. Unfortunately, Calan was also involved, and his race ended without him being able to use the good starting position. A safety car phase followed in which the damaged cars were cleared away. Federico had held 13th place and Matteo was already 21st, but then Lawson’s car lost oil and a fire broke out on his vehicle. The safety car took over the field again, but because of the oil trail Lawson had drawn far over the course, the race was interrupted with the red flag. All vehicles drove back to the pit lane, where they waited in a row. The officials were doing everything to bind the long oil track with cement as quickly as possible. At the restart behind the safety car there were still 15 laps to go. Now the track was quite dry, but in some places it remained still wet. Matteo, who had already moved up to 17th place, received a drive-through penalty for leaving too big of a distance to the car in front of him under Safety Car conditions. He dropped back to 22nd place. A pity! Federico found a good rhythm and was already past Dunner when he got a little off the track and lost time on the still slippery surface. With that, Dunner managed to regain the position. Federico finished a good 13th, and Matteo finished 22nd. 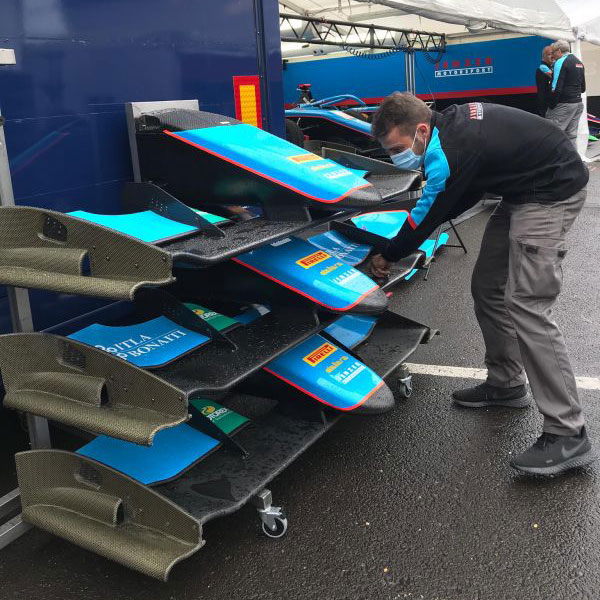 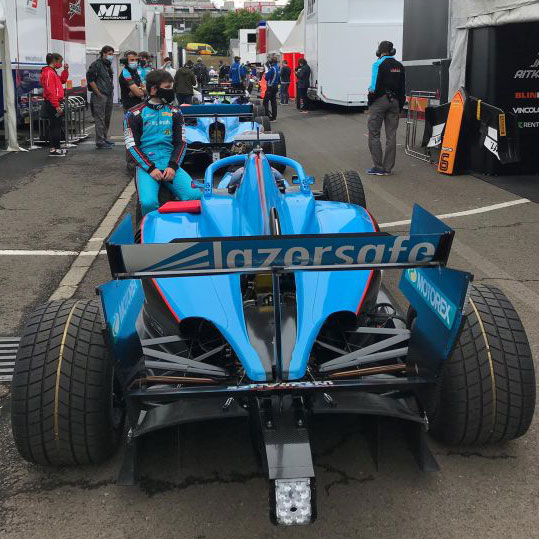 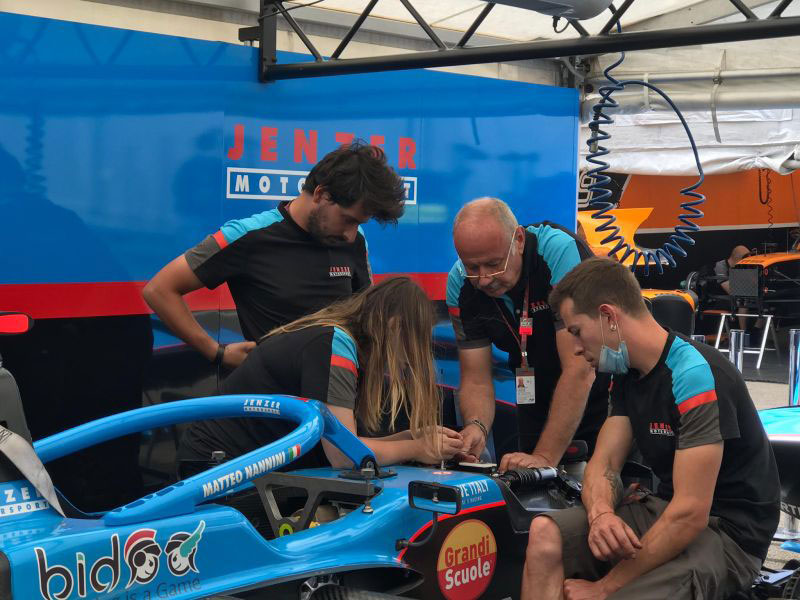 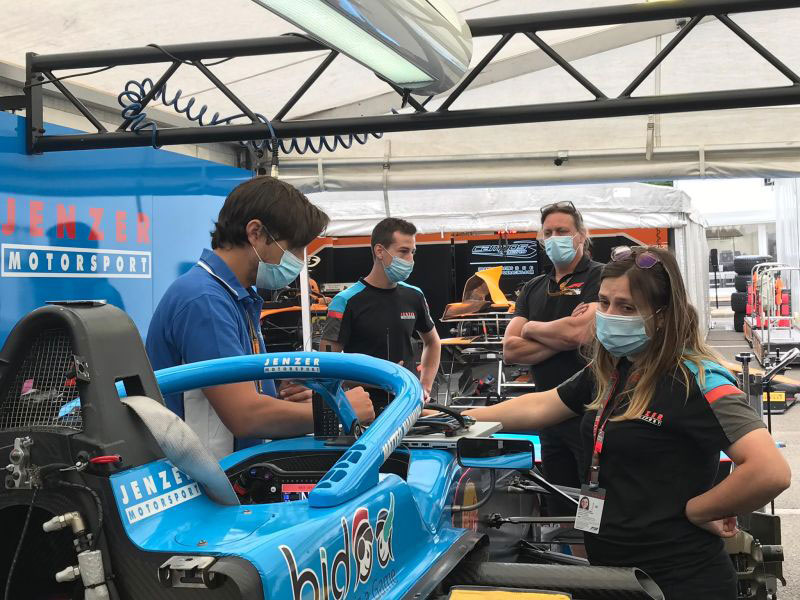 The race on Sunday morning started in cool temperatures and on a wet track. Raindrops continued to fall for a while, but there was no major downpour. Nevertheless there was a lot of spray on the track. Federico was in 17th position, Matteo 21st and Calan already 25th when the Saftety Car took over the field after an accident. At the restart, Federico improved to 15th place. Matteo was now 18th and tried to make up more places. He had contact with a competitor, spun, and then came back to the pit lane because his front wing was damaged. Matteo then finished the race equipped with a new part and reached the finish line in 25th. Calan improved in big steps and brought home a great 15th place at the end. Federico, who was consistently in 15th place, skidded in a curve and spun. Unfortunately, he hit the barrier with the rear and stopped. Federico had lost the good position and the safety car took over the field again for the last two laps.

After a short break, the F1 and all series in the supporting program will once again compete in a three race weekend package. At the beginning there will be two events in Silverstone, followed by an event in Barcelona.

Championship standings after 6 out of 18 races: