Podium for Edgar in Mugello

DThe sixth and penultimate event of the Italian FIA Formula 4 Championship took place at the demanding Mugello circuit (I). The weather was reasonably good, although the temperature was quite low. 28 drivers signed up for this round. You can follow the races live on sporttube tv.

It rained heavily during the night, and because it was cool, the track was slow to dry. In some places it was still slippery, which resulted in a number of accidents during the race; everyone started on slick tyres, though. Jonny did not get away well and lost two places at the start, then another car got stuck in the gravel, and the Safety Car was deployed. At the restart, Jonny managed some good overtaking moves to climb up to 5th place. He’d now settled into a good rhythm, setting the fastest lap time of the race and putting pressure on Dürksen. Jonny attacked and made it stick and was now in 4th place and closing steadily on Petecof. However the Safety Car was sent out again, and the race was neutralised and ended behind it. Axel started well and moved forward place by place. He put in a strong performance and crossed the finish line in 11th place. Emidio also had a good race, and also moved steadily forward during it. He crossed the finish line in 18th place. Afterwards Petecof was hit with a 10-second penalty for causing the accident with Hauger, which moved all of our drivers up a place. Jonny thus stepped onto the podium with an excellent 3rd. and Axel got the last available point with a great 10th place. Emidio was classified as 17th. 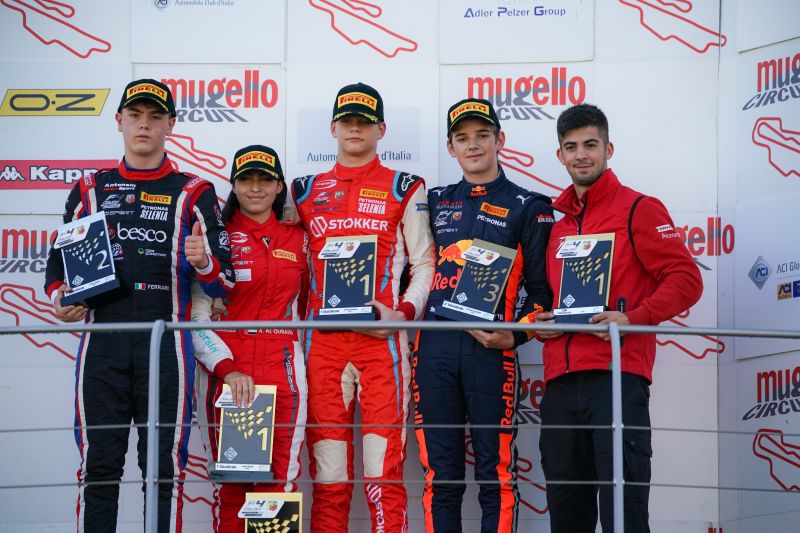 After the first lap Jonny came round in 9th position and then started a pursuit of Ferrari and Belov. There was a Safety Car period and Jonny was able to pass both of them in a nice move at the restart, but then Ferrari was able to claim the place back. After a fierce race Jonny reached the finish line in 9th place. Axel started well and advanced to 12th place, then got embroiled in a battle with Allecco and Rasmussen which led to him dropping back to 13th. He didn’t give up and later gained 12th place back. Emidio started well, but then had an off track moment and lost several places. During the race he steadily regained those places and finished a good race in 19th. After the race, Ferrari was given a time penalty for overtaking in a no go situation. That moved Jonny up to 8th place, and meant Axel just missed out on points with 11th place. Emidio was classified in 19th.

The third race of the weekend took place on Sunday morning in bright sunshine. Most drivers had a bit of a problem with the tyres, so there was a little less overtaking going on than before. Jonny started in 12th and managed to improve to 10th which meant he snapped up the last available point. Emidio drove a consistent race and managed to improve by two places on the final corner just before the finish line. He took the chequered flag in 21st place. Axel stalled the engine at the start and did not get underway until the whole field had gone. After some incident, the car did not feel right, but he bravely completed the race and reached the finish in 27th place.

The seventh and last race meeting of the Italian Formula championship is scheduled for the weekend of 20th October 2019 at Monza (I).